Although Ellowyne had just met Penn, it was clear to Rufus that she was interested. She never looked at him the way she looked at Penn. Blinking back the hot tears welling up in his eyes, Rufus plugged in his smart phone and sat in his car, feeling too numb to drive home. He tortured himself by listening to love songs that reminded him of Ellowyne like Aerosmith’s I Don’t Want to Miss a Thing to Led Zeppelin’s All of My Love. Breakup songs like Love Hurts, Love Stinks, and Lonesome Loser gave voice to his feelings of loss and despair. When he heard a familiar tune by Cee Lo Green, he sang along. “I see you driving ‘round town with the girl I love and I’m like ‘Fu—‘“

The sound of tapping on his car window interrupted Rufus’ private sing-along. It was Ellowyne. “Hey, what are you doing out here?”

“Um, I was just getting my sweatshirt. Let’s go back inside.”

Rufus wanted to dislike Penn but he found him to be smart and funny. He also thought Penn looked familiar but he couldn’t remember where he might have seen him. They exchanged phone numbers and Instagram user names and added each other as friends on Facebook. Penn asked Rufus if they could get together to have coffee or some craft beer. Rufus agreed and they made plans to go meet the next day. It would be his first real man date with someone other than his engineering school buddies. 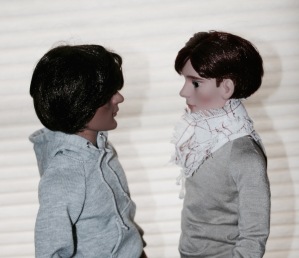 The next day, Rufus met Penn at his favorite dive bar for burgers and craft brew. Penn ordered some poutine, a Canadian concoction made with fries, gravy, and squeaky cheese curds. Rufus thought they sounded strange and was surprised at how delicious they were.

But that wasn’t the only surprise of the day. As the guys devoured their food, Penn leaned across the table and told Rufus he thought he was quite attractive. Rufus was startled and nearly choked on his craft beer. “Uh—I’m straight.”

Penn was crestfallen. “I saw you this summer at Pride.”

“That’s where I’ve seen you,” Rufus said. “I march every year with PFLAG. I have two moms.”

“Hey To tell you the truth, I’m flattered. I’d like to be friends.”

“Sure. I’d like that. Hey, do you think Ellowyne, Pru, and Lizette would be okay knowing I’m gay?”

“Of course they would. But you might want to get to know them a bit better than telling them straight away.”

“Straight away?” Penn laughed so hard that beer almost came out of his nose. The two new friends agreed to get together for Korean food in a couple of days.

As Rufus got into his car, he got a text from Ellowyne “How was your man date?”

“Gr8!,” he texted back. And it WAS a great day. Not only did Rufus make a new friend, he also found out that his chief rival for Ellowyne’s affections simply wasn’t interested in her. He smirked at his reflection in the rear view mirror. “And you were so worried,” he said smugly to himself.